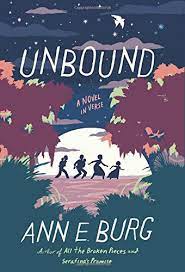 I read the book, Unbound by Ann E. Burg.  It is a book of fiction, but actually could have been based on true stories.

It was about a young girl named Grace and her family who were slaves.  The book is written in Grace’s voice and tells the story of their escaping to freedom.  I think the title of the book, Unbound, was a great title for it as the word unbound means to be free.   The cover is also a good indication of what the story may be about.  It shows shadows of figures that look like they are sneaking away in the night.  I liked the style that the book was written in – the entire book was in verse, almost like a poem, and that was a different style that I had not read before in a whole book.

I really liked Grace in the story because she was very encouraging and kind.  She showed so much strength and courage in urging her family to run away, fearing that her family would be sold and separated.  The other character that I liked was OleGeorgeCooper, a runaway slave who had escaped and helped to lead Grace and her family to his cave in the Great Dismal Swamp on their journey to freedom.  In the book, Grace tells of at first being afraid of OleGeorgeCooper, because of his voice, stories and scars from being beaten, whipped and burned, but she ended up not being afraid of him.  The description of him makes me feel like he was definitely someone worth knowing and learning from!

One of my favorite quotes in the book is “I wonder how it feels to be the cool, clear water what runs without bein chased.”  It really shows how she felt about being free.

All in all, this was a good book to read and I would recommend it.