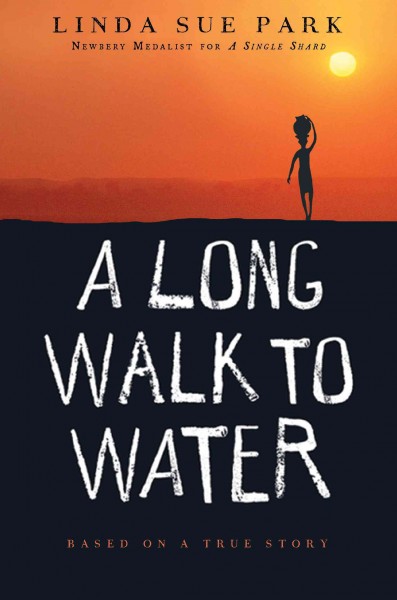 The novel I read for this book review was “A Long Walk To Water” by Linda Sue Park. The purpose of this novel was to show us what perseverance really is and to influence us to push through tough times. The novel has many good uses of diction that makes you feel like you're actually experiencing the events occurring in this novel. Resilience is also depicted as a necessity in this novel. Not only was this a good book, but one of the best books I've ever read.Yet there is one thing that truly creates the structure  for the whole novel which was the diversity of the setting since it doesn't take place in America. But there was something about this novel that I did not like, which was the number of pages this novel had. I think that more pages would have made this novel better than it already is. Overall I would give this book a 9/10 for the ingenuity and attention to detail that it showed throughout the novel that made me love it so much. Overall, if you like a good novel that has you on the edge of your seat the whole time, this is for you.

The book I read is called "A Long Walk to Water." It is a book that takes place in Sudan, and other areas of Africa. The book was written through two points of views. One point of view is from a boy named Salva Dut that was living through a very poor and unsafe time in Southern Sudan in 1985. The other point of view is of a girl named Nya, and she was living through a difficult time of her life in Southern Sudan in 2008. I really enjoyed this book because it is based off of a true story and showed how hard it is for somebody to be living in that place in 1985, and also closer to the present. Salva's town was shot up by the people that were going into a war, and he had to run away with a group of strangers at only 11 years old. Nya's family lived in an area where Nya had to walk about 8 hours to get water, that was not even completely clean just so she could survive. I like the way that the book was written and how it showed both points of views. What I think was funny is that the book was short, and only 115 pages but the book is called "A 'Long' Walk to Water." Besides the book, Salva Dut is actually a real man, who really experienced the things the book states he did. He now has an amazing organization where people drill wells, to provide clean and safe drinking water.

The book A Long Walk to Water is about a young boy named Salva Dut who lives in Southern Sudan, where there is a war between the Nuer and the Dinka. One day, Salva was in school and he heard bombing noises. His teacher told all the kids to run to the bushes and away from the village. Salva ran until his legs were numb and he couldn’t run anymore. He was walking until he was stopped by some soldiers. The soldiers told all of the people to separate into two groups. One group with women and children, and the other with men. Salva went to one group at first, but the soldiers told him to go with the women and children. After the soldiers left with the men, Salva kept walking until he came across a small hut. He met with the Dinka woman living there, and she gave him some food and water. After a while, Salva was part of this new group that was going to a refugee camp in Ethiopia. This would be a long and dangerous trip. Read the book A Long Walk to Water to find out about Salva and his trip.

Submitted by T. A.