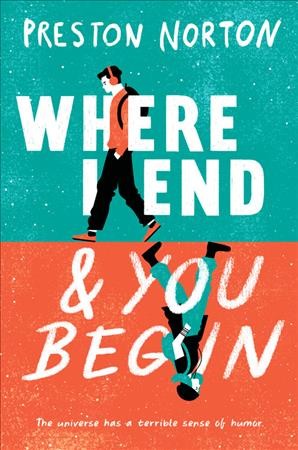 Where I End and You Begin is about Ezra Slevin, a teenager who has insomnia, he has a crush on a girl, Imogen, and is planning on asking her to Prom. During the night of an eclipse, which happens at the start of the book, Imogen’s best friend, Wynonna (who harasses Ezra, who both mutually despise each other) , and Ezra swap bodys, then switch back to normal. Only this continued to happen, and they wouldn’t swap back for longer periods of time.

The main conflict in this book is how Ezra and Wynonna switch bodys randomly, usually during the night. The author did a good job on showing some of the scenarios that would happen, like if one of them were driving a car. Ezra and Wynonna didn’t want to ruin each other's life, so they had to get used to being in each other's shoes and pretending they were someone they were not. While swapped, Ezra and Wynonna discover secrets about each other,  Ezra learns that Wynonna is crushing over his best friend, Holden, and Wynonna learns about Ezra’s not so very secret youtube channel that no one in the schools knows about. Ezra and Wynonna eventually figure things out in the end, and everything seems to be in order. I feel like the book is almost a bit too short, like there was a part in the book where it skips an entire month, I feel that the author should’ve written at least some of it down, too show the panic in Ezra as he had to cope with the idea of not switching back, and getting used to the idea that he won’t. Which was very abrupt to me. This book was so great I almost feel like I don’t know what to do with my time, other than read more of Preston’s book. What I dislike is that it wasn’t made clear why Ezra and Wynonna were swapping bodys, and if they stopped at the end. The book did say a possibility, but we can’t know for sure.

I think this was a really great read, not many books make me want to read them non-stop, and this book definitely did. I think the author did a great job of portraying the challenges if this were to actually happen to someone, and it was always getting more and more interesting the more I read. If you read some of Preston Norton’s other work, like Neanderthal Opens the Door to the Universe, I would definitely give this book a read. I’d give it ★★★★★

Submitted by A. R.