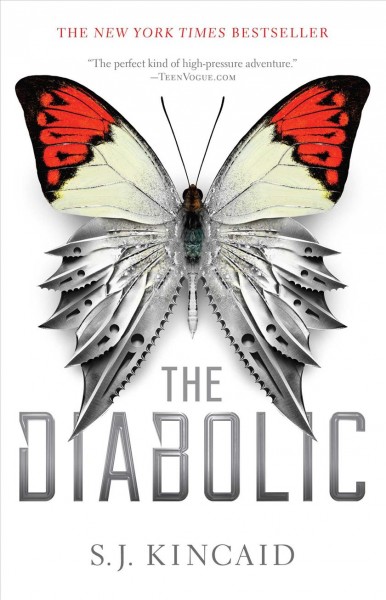 The book Diabolic by S. J. Kincaid is mostly fantasy.  In the novel, there are some things that could eventually happen, like advanced space vessels and extended space travel.  There are creatures that look like people but are bred and are trained, who are called diabolics. Diabolics are assigned to protect one person for their whole lives, in addition they are bred without emotion.  The main character is Nemesis, who is a diabolic. Nemesis is assigned to protect a senator’s daughter who’s name is Sidonia. She does this and lives with Sidonia and her family for a few years, next, unfortunately Sidonia’s father interest in astronomy is revealed ,which causes the emperor to become infuriated with him.  The emperor is enraged because no one is allowed to study new things. It has been this way in the society for hundreds of years. One emperor who felt threatened by his people’s knowledge destroyed all the stored knowledge they had. So, as a punishment the emperor makes the senator send his daughter, Sidonia, to his palace.  What happens next will keep you at the edge of your seat. One of the many reason I liked this book was that it is was extremely entertaining. This was a book that had a lot of details, and therefore I would recommend it if you have a good imagination, because you could easily visualize what was happening. Overall, I would give this book a eight out of ten, because I enjoyed it, but I couldn't necessarily connect to the main character, since she didn't have emotions.

Submitted by E. A.

Do you enjoy space? Do you like thinking of worlds beyond? Do you like thrills and adventure? Well then The Diabolic is the book for you! It is just right for somebody wishing to see someone else's perspective on space and the future of humanity with new technology. It is also good for someone who just wants to read a great story, wish a dash of romance on the side.
The Diabolic shows you a wonderful future with new technology created by harnessing the power from other planets that humans now populate. In the future, people have two choices of a lifestyle: they can live on man made structures in space or they can live on the habitable planets in the galaxy. People live like kings in the galaxy no matter if you're poor or not, because everybody is wealthy (???? I didn't read this book or I would try and find a better way to explain this???). The only way for your life to be judged is on your stance in society and your loyal to the throne, and not the individual who sits on it. The technology in The Diabolic is one of the many reasons to read this fantastic book.
The story in the main reasons to pick up this book, as it is filled with many twists and turns to keep you up all night. The main character is a girl named Nemesis who is brought and trained in a lab to become a Diabolic, the best type of bodyguard you can ask for. Their world is one of only violence until they are bonded with another human, to love and protect them for life. In Nemesis' case, her person is Sidonia, a young innocent girl who lives in their galaxy. Everything is good until the Emperor forced Sidonia to go to him and pay for her father's actions against the Empire. The only thing Nemesis can do is take her place and go instead. This jumping off point is a great way to keep you interested, and this amazing story has so many things to offer.
The Diabolic is an absolutely amazing book to read. It is good for somebody who is looking to see a thrilling future with a great idea behind it and full of twists and turns.
Submitted by P. V.